Greetings to all Monsters, Maniacs and Freaks of the Universe, and welcome to the wonderfully weird, fabulously freaky and completely crazy psychodelicious world of France's infamous D.I.Y. Rock Monster, TRAUMATISME.

Coming from a faraway planet, the puny little human being once known as NICOLAS TIFAGNE took a long time ago the rather unwise decision to create his own Rock and Roll oddity, bringing to life the lifelong twisted dream he promised himself to never forget. To achieve his divine mission, keeping the spirit of his mentor alive, the late EDWARD D. WOOD JR., he has fully dedicated himself to embrace his own madness, becoming the ultimate embodiment of the "Do It Yourself" ethos by pushing it to its very limits. Alone and against all corners, he pulls the strings of his progeny all by himself, writing his own songs, recording his own albums, directing his own music videos and creating his own artwork to wrap everything up, all of this with zero outside help whatsoever.

Influenced by Shock Rock heroes such as ALICE COOPER, ROB ZOMBIE, WEDNESDAY 13, KISS, GLENN DANZIG and MARILYN MANSON to name a few, TRAUMATISME is a vampire sucking the blood out of his favorite musical insanities such as horror punk, deathrock and glam metal with anthemic choruses, with sounds coming straight from an old macabre film soundtrack, and injecting everything together into his own devilishly catchy numbers. Out of time and out of fashion, this self-taught multi-instrumentalist writes the diary of his personal journey, telling tongue-in-cheek stories that range from self-empowerment tirades to alienation accounts, from cheesy B movie-inspired lyrics to frightening tales about the real horrors of everyday life, exorcising at the same time the many skeletons that are hiding inside his closet, and laying them down to rest upon a customized musical hybrid dictated by its creator's wild mood swings.

Ten years after unleashing his debut album, TRAUMATISME returned in October 2019 to put the "fun" in "funeral" with the release of his seventh monsterpiece "SUPERSTITCHES"!

Clocking in at just thirty-three minutes, "SUPERSTITCHES" is an "all killer, no filler" manifesto of bright, raw and powerful anthems made from blood, sweat, tears and heart. Introduced by opening song and video single "CROWN OF THE CLOWN", this short and electric monster is the definitive TRAUMATISME album; a cathartic and defiant celebration of life, scars and imperfections, brought to life at full throttle with personal yet universal lyrics and poignant melodies.

As always, the album's eight cuts are entirely sewed together the D.I.Y. way and produced, composed, recorded and performed by the "one-man band" alone. As each TRAUMATISME release, "SUPERSTITCHES" is a true labor of love and passion crafted with no budget, no boundaries, and most importantly, no compromise; a self-empowering rollercoaster ride made for repeated listens, and meant to be played at maximum volume!

Watch out for more music, albums, videos and other deadly little things coming straight from the demented mind of TRAUMATISME! 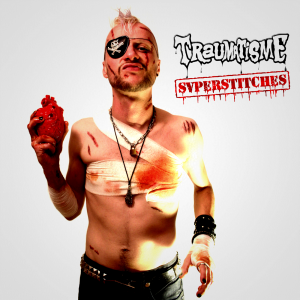